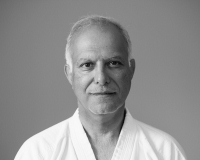 Gurmail Gill was introduced to karate in September 1977 during his student years at the University of British Columbia.
Practices were very challenging, both physically and mentally. Then came the experience of his first special training, in January of 1978, which really opened his eyes to the idea of human potential and it cemented his commitment to a lifetime of practice. He continued practicing at the university dojo and assisting in club administration, and in 1980 was awarded the rank of Shodan.

In the years following, Gurmail practiced at the North Delta dojo, was the lead instructor at the Burnaby dojo and eventually returned to the North Delta dojo where he currently assists in leading classes from time to time. He has had numerous opportunities to practice under the direct tutelage and inspiration of Ohshima Sensei.

Over the years Gurmail has participated in numerous special trainings as well as a number of International Shotokan gatherings and practices, including in Santa Barbara, Tokyo, Jerusalem and Paris.

Gurmail was awarded the rank of Godan by Ohshima Sensei following an examination at the 40th anniversary celebration of Canada Shotokan, held in August 2012 in Vancouver. He is grateful to his direct seniors for their lessons and their example.