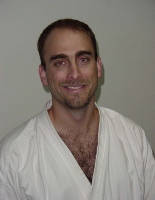 Ryan Hill has been practicing Shotokan Karate since 1983. He began in Kamloops under the guidance of Rob Powers and Al Goessman. He was promoted to black belt by Ohshima Sensei at the age of 18, after which he spent one year training at Waseda University in Tokyo. There, he trained regularly with Senior Kamata Watanabe and also met many other seniors including Mr. Ono and Mr. Noguchi (the first captain of Waseda Karate Club). After returning to Canada, Ryan was an assistant instructor to Don Gee at the UBC dojo in the late 1980s and most of the 1990s. Ryan moved to Montreal in 2001, where he started the Little Burgundy dojo. He led that dojo until he returned to Vancouver in 2007. Ryan has been leading the UBC dojo since 2011, and continues to practice seriously under the guidance of Norman Welch and other seniors in western Canada. He regularly travels to California to practice with Ohshima Sensei. Ryan was promoted to rank of Godan at France Shotokan’s 50th Anniversary in Saint-Lô, Normandy in July 2014.